Theô Kodak Digital Camera System is a series ofô digital single-lens reflex cameras andô digital camera backs that were released byô Kodak in the 1990s and 2000s, and discontinued in 2005. They were all based on existing 35mm film SLRs from Nikon and Canon. The range included the originalô Kodak DCS, the very first commercially available digital SLR.

A number of otherô inventions were made to increase usability, including improvements in sensor technology, the firstô Raw image format DCR, and usable host software. The original Kodak DCS was launched in 1991, and was based on a stockô Nikon F3 SLR with digital components. It used a 1.3-megapixel Kodak KAF-1300 sensor, and a separate shoulder-mounted processing and storage unit. The DCS 200 series of 1992 condensed the storage unit into a module which mounted onto the base and back of a stockô Nikon F801s SLR. The module contained a built-in 80 megabyte hard drive and was powered with AA batteries. It was followed by the upgraded DCS 400 series of 1994, which replaced the hard drive with aô PCMCIA card slot. The DCS 400 series included the 1.5-megapixel DCS 420, and the 6-megapixel Kodak DCS 460, which retailed for $28,000 on launch.[4] In common with Kodak's later 6-megapixel models, the DCS 460 used the award-winningô APS-H Kodak M6 sensor.[5] A modified version of the DCS 420 was also sold by theô Associated Press as the Associated Press NC2000.[6] In parallel with the DCS 400 series Kodak also sold the analogous Kodak EOS DCS range, which was based on theô Canon EOS-1N SLR. With the exception of the original DCS 100, these early models did not include LCD preview screens.

Kodak's subsequent models integrated the digital module with the camera body more thoroughly, and included LCD preview screens and removable batteries. The DCS 500 series of 1998 was also based on the Canon EOS-1N, and comprised the 2-megapixel DCS 520 and the 6-megapixel DCS 560, which initially had a suggested retail price of $28,500.[7] These models were also sold by Canon, as the Canon D2000 and D6000 respectively, and were the first digital SLRs sold under theCanon name. Kodak used the same electronics package for the DCS 600 series, which was based on theô Nikon F5. The DCS 600 range included the Kodak DCS 620x, a high-sensitivity model with an upgradedô indium tin oxide sensor and a cyan-magenta-yellowô Bayer filter, which had a then-unique topISO setting of ISO 6400.

Kodak final generation of DCS cameras was launched with the Kodak DCS Pro 14n, a 14-megapixelô full-frame digital SLR, in 2002, and continued with the upgraded DCS PRO SLR/n in 2004. These two cameras were based on a Nikon F80 body, and were considerably more compact than previous Kodaks. They used sensors designed by Belgian imaging company FillFactory. The DCS PRO SLR/n was also accompanied by the Canon-compatible DCS PRO SLR/c, which was based on a Sigma SA9 SLR. Kodak discontinued the SLR/n and SLR/c in May 2005,[9] to concentrate on compact digital cameras and high-end medium formatô digital backs forô Leaf, among others.

Kodak continued to design and manufacture digital imaging sensors, including the full-frame 18-megapixel KAF-18500, which is used in theô Leica M9 digital rangefinder, until its digital sensor division was sold to Platinum Equity in 2012. This digital sensor company now operates under the name Trusense.[10] 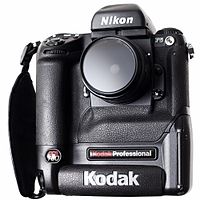 A Kodak DCS 760, a six megapixel digital SLR based on aNikon F5

All models based onô Nikon body and use Nikon'sô F mount.

A Kodak DCS 560, a six megapixel digital SLR based on aCanon EOS-1N