POSTED BY ILIAS-MAN ONô WEDNESDAY, FEBRUARY 8, 2012 3 COMMENTS
We thought that limiting the current of recharging the batteries did the trick,ô but no! the electrolyteleaks from the end of the negative terminal, when the battery leaks, it loses in the best case 50% of its capacity. more leakage always ends with a small explosion,ô so another method is needed!!!

The technique of a discontinuous contact: thanks to this technique the battery could suffer much lessstress when recharging but on condition of leaving the battery two times longer to rest than to recharge (2 seconds of 6) 2s charging, 4s resting, And it works! batteries recharged without problems!
weather when recharging AA, AAA or 9 volt,ô no problem it works and it does not leak.ô In the worst casewe can always limit the intensity. 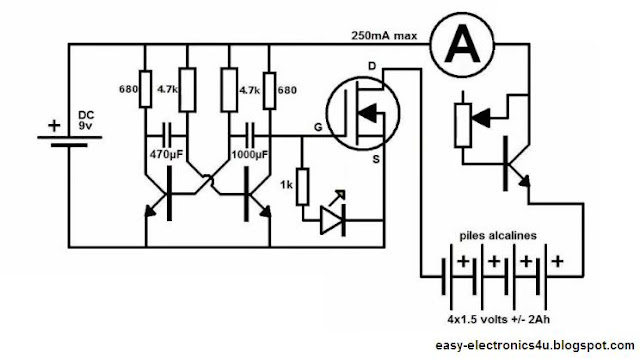 The circuit consists of a simple oscillator that charges the batteries for 2 seconds and stop for 4 seconds.
The oscillator drives the Mosfet that charges the batteries.
Choose any mosfet Type, and any small transistor, that handle the charging current, if you want to charge a lot of batteries choose a high current transistors.
Another transistor and a potentiometer control the charging current, to charge all types (AAA AA 9V):
I recommend: 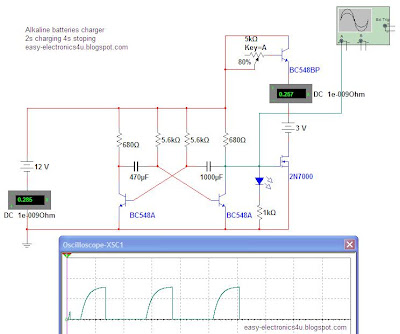 To recharge the batteries you must inject a voltage greater than the batteries voltageô by X1.5.
This charger can charge as many batteries as you want!ô with 12 volts can be up to 6 (withô more than 12 volts but in this case consider increasing the value of some resistors).
To make sure that your batteries are full charged and not damaging them,ô monitor their voltage, it should not exceedô 110%, for example: a battery of 1.5V, maximum charge voltage is 1.65V.
(considering regeneration 80%), a 2Ah battery needs 20h for a complete recharge, Long? not really if you're not pressed.

It makes sense to use alkaline batteries

Alkaline batteries have long shelf lives and they do not suffer the 'memory effects' of Nickel-cadmium batteries. The term 'Memory effects' refers to the batteries becoming weaker with continued use, particularly when the batteries have seen light use and do not respond well to further charging. The problem stems from low battery currents which flow from only a small part of the active anode area of the battery. If higher current had been drawn or if the battery had been completely discharged, the whole active area of the anode would have been involved. The unused area essentially 'films over' and acts as a barrier to current flow. Further charging does not restore the active area.

Alkaline batteries do not self-discharge. This is a chemical change causing the electrodes to degenerate in Nickel-metal hydride and Nickel-cadmium batteries. It is reversible by charging and discharging several times. Batteries that are not recharged before use will not supply the full amount of stored energy. None of the above happens with common Alkaline batteries. The rate of self discharge in Nickel-cadmium is about 2% per week, in Nickel-metal hydride it is about 3% per week. At temperatures higher than room temperature, these rates increase.

What about alkaline batteries designed to be recharged?

Paradoxically, these higher-priced specialty batteries, known as RAM batteries, or Rechargeable Alkaline Manganese, are not rated highly in technical reports. Some trade magazines list them as rechargeable for only 25 to 30 times at the most. They are not satisfactory when used in high-drain applications such as digital cameras, as the voltage supplied by the battery drops low in response to high current demands. One battery sales representative referred to RAM batteries as being 'soft' batteries. (His company did not make RAM batteries at the time, and still does not.)

How difficult is it to recharge an ordinary alkaline battery?

Very difficult if you don't own the right type of equipment designed to do the job. We have been telling you of a safety-tested, dependable charger that has been around for years, and will remind you again at the end of this chapter. Using theô wrong type of charger on alkaline batteries can be downright dangerous. Just read the warning labels printed on ordinary batteries. A NiCad charger shouldô never be used on alkaline batteries. Such a charger would supply currents in excess of safe values, would not turn off automatically when battery voltage exceeds safe limits, and would continue unchecked until the battery was damaged.

How many times can an ordinary alkaline battery be recharged?

Would you believe hundreds of times? The trick is to stop using the battery well before it has given up all of its available stored energy. Note that this is directly opposite to the instructions that were packed with your battery-operated drill or screwdriver with its NiCad batteries. When the drill stops turning, charge the battery, but not before. Good rule for NiCads, but not for alkaline batteries.

Assuming you now have a charger to safely charge alkalines, don't wait for the battery to stop working. In order to achieve ten times extension of the normal life of an everyday alkaline battery, you will have to recharge it frequently, many more times than ten. It makes sense to use a second set of batteries for a high drain device. Take out one set of batteries when the device is not being used, and put in the second set that has been recharged. Charge the first set and carry it with you as a backup if necessary.

Why did it take so long for a good alkaline charger to be developed?

There have been many more failures than successes along the road to developing a good charger. Products were announced, and then you didn't see any more of them. The reason is simple -- they didn't work. One came close to working, the Buddy-L SuperCharger, announced in 1993.ô Popular Science magazine named it as one of the 100 top scientific achievements of the year. But it did not live up to expectations. Apparently, the product was launched into production too quickly, and sub-standard operation resulted. Fortunately, the problems did not hurt the batteries. The batteries simply switched off prematurely before charging was complete, and the users had to restart the charging process several times. Also, it was not designed for easy battery insertion, always requiring two hands and a struggle. Eleven years later, many people are still using their SuperChargers and are reluctant to part with them.

All the background information was absorbed and a totally re-engineered product emerged, theô Battery Xtender ã Â Tests have shown that it does live up to expectations, and that the claims of ten times life extension for ordinary alkaline batteries are not exaggerated. The case has been redesigned to allow easy one-handed access to the batteries, and it occupies much less space on a desk, table top or counter.

Consider the cost savings and the convenience

If your buying and collecting habits are typical, you will have drawers full of batteries of unknown status and age, and more non-functional chargers lying about than you would like to admit. If you switch to alkaline batteries in as many devices as possible, and charge them as well as NiMH and NiCad batteries side-by-side in theô Battery Xtender ã Â you will have the opportunity to clean up the disorganization and start saving money. The convenience of having newly-recharged alkalines in that drawer means not having to rush to the store to equip a flashlight when a storm approaches, or other sudden requirement. If you want to find the best deals on new batteries, as some of the old batteries will be too far gone to reuse, please check out theô Recommended Sources on theô Battery economy page.