When the Apple IIGS computer was introduced in September 1986, Apple announced it would be making an upgrade kit for the IIe. The upgrade cost US $500, plus the trade-in of the user's existing Apple IIe motherboard and baseplate.

Users would bring their Apple IIe machines into an authorized dealership, where the 65(C)02-based IIe motherboard and lower baseboard of the case were swapped for a 65C816-based Apple IIGS motherboard with a new baseboard. New metal sticker ID badges replaced those on the front of the Apple IIe, rebranding the machine. Retained were the upper half of the IIe case, the keyboard, speaker, and power supply. Original IIGS motherboards (those produced between 1986 and mid-1989) had electrical connections for the IIe power supply and keyboard present, although only about half produced had the physical plug connectors factory-soldered in.

Back view of IIGS upgrade. Note the new port openings and connectors.

It proved unpopular as it did not include a mouse; the keyboard did not mimic all the features of the Apple Desktop Bus keyboard; and some cards designed for the Apple IIGS did not fit in the Apple IIe's slanted case. In the end most users found they were not saving much, once they had to purchase a 3.5-inch floppy drive, analog RGB monitor, and mouse.[citation needed]

For a time the Western Design Center (the company that designed the 16-bit 65C816 processor used in the Apple IIGS) also sold a 16-bit 65C802 processor that was a drop-in, pin-compatible replacement for the 65(C)02 that made the full 16-bit 65C816 instruction set available to the IIe, but using the same 8-bit data bus as the 65(C)02; however, this upgrade was insufficient, by itself, to allow IIGS software to run, as IIGS software required the IIGSâ€™s firmware and specialized hardware. 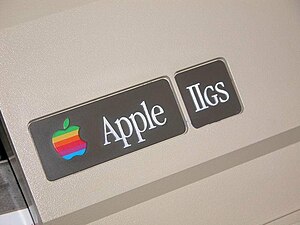