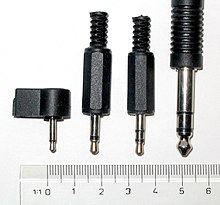 Modern phone connectors are available in three standard sizes. The originalĀ 1ā 4 in (6.35Ā mm) version dates from 1878, when it was used forĀ manual telephone exchanges, making it possibly the oldest electrical connector standard still in use.

The 3.5Ā mm orĀ miniature and 2.5Ā mm orĀ sub-miniature sizes were originally designed as two-conductor connectors for earpieces onĀ transistor radios. The 3.5Ā mm connector, which is the most commonly used in portable application today, has been around at least since the Sony EFM-117J radio which was released in 1964.[6][7] It became very popular with its application on theĀ Walkman in 1979.

The 3.5Ā mm and 2.5Ā mm sizes are also referred to asĀ 1ā 8 in andĀ 3ā 32 in respectively in the United States, though those dimensions are only approximations. All three sizes are now readily available in two-conductor (unbalanced mono) and three-conductor (balanced mono or unbalancedĀ stereo) versions.

Four- and five-conductor versions of the 3.5Ā mm plug are used for certain applications. A four-conductor version is often used in compactĀ camcorders and portable media players, and sometimes also inĀ laptop computers andĀ smartphones, providing stereo sound plus a video signal. Proprietary interfaces using both four- and five-conductor versions exist, where the extra conductors are used to supply power for accessories. The four-conductor 3.5Ā mm plug is also used as a speaker-microphone connector on handheldĀ amateur radio transceivers fromĀ Yaesu[8] and on someĀ mobile phones.

The most common arrangement remains to have the male plug on the cable and the female socket mounted in a piece of equipment: the original intention of the design. A considerable variety of line plugs and panel sockets is available, including plugs suiting various cable sizes, right-angle plugs, and both plugs and sockets in a variety of price ranges and with current capacities up to 15Ā amperes for certain heavy dutyĀ 1ā 4 in versions intended forloudspeaker connections.[9]